Weekend Forecast: 'The Internship' & 'The Purge' 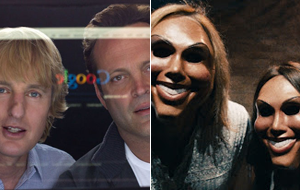 As June's first official new releases, The Internship and The Purge will enter the market this weekend in an effort to dethrone Fast & Furious 6 as the top film at the box office. Will either succeed?

Most holdovers should see softer drops this weekend in relation to last.

- Vince Vaughn and Owen Wilson have a strong box office history together.
- Marketing has been ever-present, including a high volume of free early screenings.
- With audiences generally disappointed in The Hangover Part III, this could stand to gain some interest from those seeking a comedy.

- Vaughn's and Wilson's last big hit was eight years ago with Wedding Crashers. In recent years Vaughn has headlined several box office disappointments.
- Twitter activity is lagging behind last summer's The Watch, while Flixster numbers trail those of The Incredible Burt Wonderstone.
- Reviews are heading south.
- This Is the End, opening five days later, has been the recipient of stronger buzz. Could it further soften demand for this?

- Social network activity has been extraordinarily strong with Twitter delivering an impressive volume of conversation this week.
- Audiences may be looking for something outside the realm of big blockbuster pics after a month crammed full of them.
- Early buzz for the film has been quite positive relative to its genre.

- The concept could skew strongly toward males and the Internet crowd.
- With the market dropping sharply last week and the strong-selling Man of Steel around the corner, will audiences head to the theater this weekend or save their cash for summer's next slew of high profile titles?

We are forecasting final domestic totals of $45 million and $51 million for The Internship and The Purge, respectively.

Tags: The Internship, The Purge