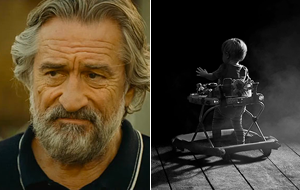 Two films have been added to our Long Range Forecast this week: The Family and Insidious Chapter 2, slated to open on Friday, September 13.

- Robert De Niro returning to the mob genre could be a welcome sight for audiences, especially after his well-received turn in Silver Linings Playbook.
- Adult audiences could gravitate toward this after relatively few options in late August/early September.

- The post-summer September release places it in the middle of a potentially slow market.
- De Niro isn't quite the draw he used to be.

- The first film was a sleeper hit that developed a following of its own, not to mention strong legs at the box office.
- The supernatural genre continues to deliver hits in recent years.
- The first trailer led to a wave of enthusiasm on Facebook and Twitter. Horror fans are clearly excited.

- Opening one month out from Halloween may cause it to lose any potential Halloween bump.
- Horror sequels can be hit and miss as not all become major franchises ala Paranormal Activity.

Notable changes on our forecast this week include 2 Guns (down), Elysium (up), Planes (up).