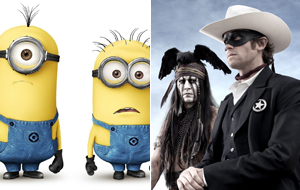 Opening in time for Independence Day weekend are Illumination Entertainment's Despicable Me 2 and Disney's The Lone Ranger. Both films release on Wednesday, July 3 with previews beginning Tuesday at 7pm.

- Minions, minions, and more minions.
- The original film posted a stellar box office run three summers ago, sprouting some of the best legs for an animated movie since the first Shrek.
- Twitter, Flixster, and Facebook activity have been consistently strong, the former edging out Monsters University this week.
- Impressive home video sales for the first film.
- The all-star cast will continue interesting adult audiences.
- The holiday opening.

- Opening two weeks after the successful Monsters University could arguably cut down on upfront interest.
- The already very busy marketplace.
- Not all animated sequels live up to their predecessors at the box office (see Cars 2 and Kung Fu Panda 2).

- Johnny Depp.
- The Disney marketing muscle.
- The established brand name could cater well toward older audiences not interested in Despicable Me 2 this weekend.
- The disappointment of White House Down could mean those looking for an action flick will opt for this instead.

- Social network activity has left a lot to be desired.
- The film is only #4 on Fandango's best sellers list (as of Tuesday afternoon).
- Reviews are in the cellar.
- Being adapted on a very outdated TV series likely means a lack of interest from younger audiences, despite Depp's presence.
- Depp has become somewhat criticized for taking on roles similar to his Jack Sparrow character--this one being the latest subject.
- Westerns typically do not fare well at the box office, especially in the summer (see Wild Wild West and Cowboys & Aliens).
- Families that may otherwise check out a new Depp-Disney flick will be more preoccupied with Despicable Me 2 this weekend, among other competitors.
- The film has been the target of frequent bad buzz since production began.