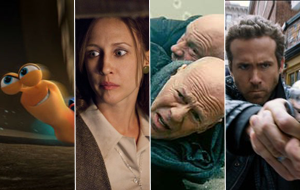 Four new films enter an already crowded market this weekend. Turbo opened on Wednesday, July 17, to be followed by The Conjuring, Red 2, and R.I.P.D. on Friday, July 19.

- The DreamWorks name is a strong selling point for families.
- Even non-event animated films tend to do decent business.
- Families who have had their fill of Despicable Me 2 and Monsters University may give this a shot.

- Opening in a crowded market won't do it any favors.
- Despicable Me 2 and Monsters University will still be combining for a large chunk of business this weekend.
- Twitter activity has been crawling at a snail's pace.

- Buzz surrounding the film has been very positive since the film's debut at the Los Angeles Film Festival in June.
- Reviews are strong.
- Supernatural-leaning films are on a hot streak lately.
- Director James Wan found previous box office success with Saw and Insidious.
- The source material involving the Warrens (famous for their involvement with Amityville) is immediately recognizable to many.
- Twitter, Facebook, and Flixster activity have been consistently strong for weeks.

- The crowded market.
- The R rating will prevent some teenagers from getting in, but then again, that didn't stop The Purge or The Devil Inside from breaking out.
- How much longer will the supernatural genre keep rolling?

- The first film was a word-of-mouth hit that appealed largely to adult audiences, who haven't had as many options at the theater this summer.
- The ensemble cast.
- Provides strong counter-programming for those not interested in The Conjuring.
- Flixster activity is solid.

- Not all sequels improve upon their predecessors' runs.
- The move from the first flick's fall release to summer is questionable. Interest may not be as high in a busier market.
- The film is running behind several current release films on Twitter as of Wednesday.
- Reviews aren't looking good--something that could sway the adult audience it's targeting.

- Jeff Bridges and Ryan Reynolds offer some star credibility.
- If an effects-driven movie is going to succeed, it's going to be in the middle of summer.
- The inability for Pacific Rim to break out could have a positive, but small, effect on this.

- Negative buzz has plagued the film for months, dating back long before the first trailer even made its late debut in the spring.
- The embargo on reviews isn't an encouraging sign.
- Neither Reynolds nor Bridges are proven to be consistent box office draws.
- Pacific Rim is generating positive word of mouth, something more likely to have a negative effect on R.I.P.D. in combination with the crowded marketplace.
- Audiences may not be sold on the marketing and concept, which clearly pander to fans of Men In Black.

Check out our forecast for these films and the remainder of the weekend's top 11 in the table below.