Weekend Forecast: 'One Direction: This Is Us', 'Getaway', & 'Closed Circuit' 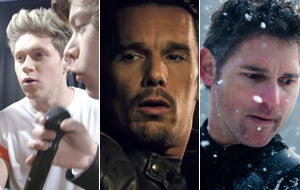 The final weekend of summer is here. Closing out the season in time for Labor Day weekend are new releases One Direction: This Is Us, Getaway, and Closed Circuit (opening Wednesday).

One Direction: This Is Us

- The band's popularity has certainly reached "phenom" status among its wide (and young) fan base.
- Twitter activity for the band has been very strong in recent weeks.
- Past concert pics from the likes of Miley Cyrus and Justin Bieber have found a great deal of box office success.

- Much of the online buzz could likely be attributed more to the release of their new single and album.
- Flixster fan anticipation is extraordinarily low.
- Concert pics don't always break out to massive numbers, although films from Katy Perry and The Jonas Brothers still fared well overall.

- Selena Gomez's presence could attract her young fans.
- Ethan Hawke is in the middle of something of a career comeback thanks to success in Sinister, The Purge, and Before Midnight.

- After a jam-packed summer market, audiences are likely to shy away from anymore action flicks right now.
- Social network buzz metrics aren't encouraging.
- Gomez's younger female fan base is more likely to show up for One Direction: This Is Us.

- Eric Bana and Rebecca Hall give the film some needed recognizable faces.
- Distributor Focus Features found surprising success with The Debt two years ago around this time of year.

- Marketing has been skim, meaning awareness itself is very low for the film.
- Opening in an estimated 800 locations will mute potential grosses even more.
- The over-crowded market is sure to hit a film like whose star power, despite being recognizable, is still next to nil.

Check out our 4-day forecast for the remaining openers and the weekend's top 11 in the table below.

Tags: One Direction: This Is Us, Getaway, Closed Circuit