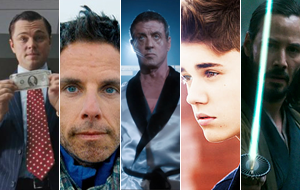 In this edition of our Long Range Forecast, we're taking at a look at Christmas Day's wide releases for what will be the final weekend of 2013.

The Wolf of Wall Street

- The fifth pairing of Scorsese and DiCaprio should have wide appeal after their immense success over the past decade.
- Leo's success from Django Unchained and The Great Gatsby is likely to carry over here.
- In the wake of Thor: The Dark World, The Hunger Games: Catching Fire, and The Hobbit: The Desolation of Smaug, older audiences will likely gravitate toward a more adult-oriented picture.
- The ensemble cast will widen the potential appeal of the film thanks to Matthew McConaughey and Jonah Hill in potential Oscar attention-grabbing roles.
- Should awards buzz follow, look for a healthy run after an already solid opening weekend.

- Will audiences be interested in seeing a 1990s-set movie about a crooked Wall Street banker?
- The apparent "sleaze" of Leo's leading character could be off-putting for general audience consumption.
- The crowded Christmas/New Year's marketplace.

The Secret Life of Walter Mitty

- Ben Stiller is a considerable draw, especially during the holidays, thanks to the Meet the Parents and Night at the Museum franchises.
- Stiller has had a successful directing career with the likes of Tropic Thunder, Zoolander, and The Cable Guy.
- Fantastical dramas tend to play well during the holiday season.

- Early reviews don't indicate as much Oscar potential as once thought, which could hamper the film if audiences don't take to it.
- Stiller is, respectably, stepping outside his directorial wheelhouse with this dramedy.
- The crowded holiday marketplace.

- The notion of seeing an aged Rocky Balboa and Jake La Motta in Stallone and De Niro could whet the appetites of older crowds during the holidays.
- Director Peter Segal has a strong track record with past hits like Get Smart, The Longest Yard, 50 First Dates, Anger Management, The Nutty Professor II, and Tommy Boy.

- Neither Stallone nor De Niro are reliable box office draws on their own these days.
- Will audiences want to watch two old guys slug it out in the middle of a packed marketplace?

- Has Bieber's reign atop popular culture started to fade? He's certainly been on the receiving end of plenty of bad publicity lately.
- The crowded marketplace.

- Stylized action fans haven't had much to choose from lately.
- Keanu Reeves gives the film some needed recognizable star power.

- Reeves hasn't been a reliable box office draw in years.
- The film will very likely be overshadowed by other holiday releases.

Notable changes on our forecast this week include Thor: The Dark World (up), About Time (up), The Best Man Holiday (up), Frozen (up), American Hustle (down) and Saving Mr. Banks (down)