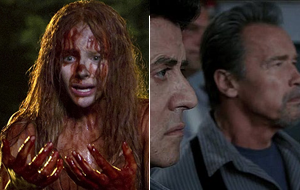 This Friday, October 18 will see the wide release of three new films: Carrie, Escape Plan, and The Fifth Estate. Will two-week champion Gravity be dethroned?

- The original film is regarded as something of a horror classic, bringing built-in appeal to this remake.
- Star Chloe Grace Moretz is a budding star thanks to the Kick-Ass franchise and Hugo, among other recent films, in which she turned heads. Julianne Moore adds some veteran star power.
- Flixster and Facebook activity have been very encouraging leading up to release.
- The horror genre is hot right now, and recent remakes have been able to do well.
- As the lone horror offering during Halloween season this year, genre fans should turn out.

- Twitter activity has been sluggish this week.
- Moretz isn't yet a proven draw outside of the film community and genre fans.
- The success of Gravity and Captain Phillips could limit the potential adult audience that is most familiar with the Carrie name.

- Bringing Arnold and Stallone together worked fairly well for The Expendables franchise.
- Twitter activity is somewhat healthier than The Last Stand at the same point before release.

- Arnold's The Last Stand and Stallone's Bullet to the Head were box office bombs earlier this year.
- Facebook and Flixster activity are very sluggish.

- Benedict Cumberbatch is becoming a more recognizable name/face thanks to his presence in a number of successful films lately, most recently Star Trek Into Darkness.
- The WikiLeaks story was widely publicized in recent years, adding some needed familiarity to the film's reason for being.

- Online activity leaves much to be desired.
- The success of other adult-leaning films lately has diminished potential demand for this.
- Critical reviews are in the cellar.
- Cumberbatch isn't yet a proven box office draw.

Check out our weekend forecast for these films and the remainder of the top 10 in the table below.