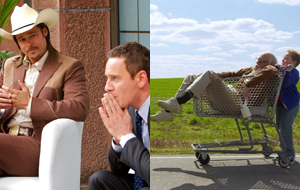 Opening this weekend are Jackass Presents: Bad Grandpa and The Counselor.

- The Jackass franchise soared to new box office heights with the third entry's $50.4 million opening three years ago.
- Pre-sales for the comedy are notably strong in comparison to other films in the marketplace.
- The franchise's Facebook following has grown significantly in the last few years, totaling more than 28 million fans.

- Without the entire Jackass crew, will audiences go in for a Borat-like plot-centric prank movie starring only Knoxville in makeup?
- Twitter and Flixster activity have been very modest, although that could be a cause of the film's late release announcement.
- Unlike the third Jackass, this pic won't have the advantage of 3D ticket sales to boost grosses.

- The glut of adult-driven films (namely Gravity and Captain Phillips) in the market right now have significantly softened demand for this.
- The film's star, Michael Fassbender, isn't yet a household name or box office draw.
- Ridley Scott's box office allure has also diminished in recent years.

Check out our forecast for these films and the remainder of the top 10 in the table below.