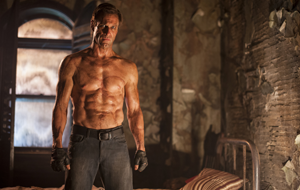 After a fantastic holiday frame, look for things to slow down this week as I, Frankenstein represents the only new release. The lack of any football playoffs should be an advantage for many films on Sunday.

- Aaron Eckhart brings a necessary familiar face to this genre film thanks to his star turns in The Dark Knight and Battle: Los Angeles.
- The IMAX release should boost receipts this weekend.
- Flixster activity is noticeably strong.

- With so many male-oriented films dominating the market right now, there's not much room left for another one.
- Online reactions to the trailers have been less than kind.
- Eckhart, though a star in his own right, isn't a guaranteed draw.
- Twitter and Facebook activity have been sorely lacking.