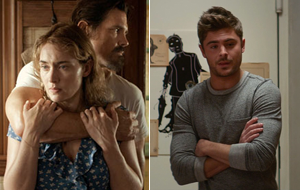 - Zac Efron, Miles Teller, and Michael B. Jordan provide strong appeal for teenage and some young adult audiences.
- Twitter and Facebook activity have trended closely with that of Warm Bodies.
- Past youth-leaning films have done well over Super Bowl weekend, including Warm Bodies and Chronicle.

- The cast's appeal rests largely with audiences that will be too young to buy a ticket.
- Flixster activity is modest, significantly trailing that of 21 & Over, and online buzz in general is expected to be strong for a film of this nature.
- Early reviews haven't been kind.

- Kate Winslet and Josh Brolin make for an appealing duo among older crowds.
- Director Jason Reitman has found previous box office success with Up In the Air and Juno.

- Neither Winslet, Brolin, or Reitman are considered reliable box office draws on a major level.
- Twitter, Facebook, and Flixster activity leave much to be desired.
- Critics' reviews are looking negative, an ominous sign with various Oscar contenders in the market competing for the same audience.