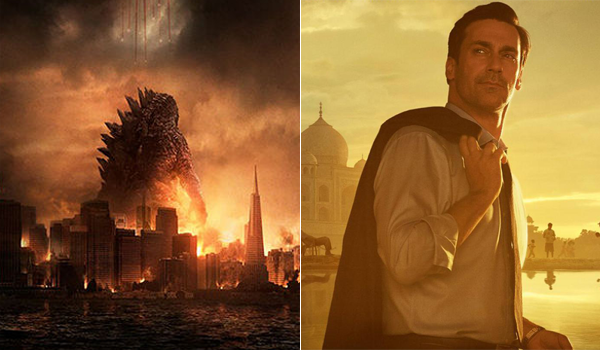 - Warner Bros. has mounted a highly effective ad campaign, showcasing the scale and character of the film without spoiling too much.
- Social media buzz has been consistently positive since the first trailer's launch in December 2013.
- The Amazing Spider-Man 2's failure to capture a blockbuster level audience could lead to extra demand for Godzilla.
- The film's ensemble cast, with Breaking Bad's Bryan Cranston featuring somewhat prominently, should help appeal to adult crowds.

- Will the bad taste of 1998's failed iteration still linger in older moviegoers' mouths?
- Neighbors's breakout last weekend, and strong word of mouth since, could hold back Godzilla from its upper-end of opening weekend potential as young adults are forced to choose between the two.
- As last year's Pacific Rim proved, monster movies aren't the major attractions they used to be. This Godzilla could change that, though.

- The Disney brand name should help this appeal to more than just baseball fans.
- Jon Hamm's star is on the rise, even if it's mostly due to his success on Mad Men.
- Positive early buzz suggests counter-programming is the order of the day with potential appeal to sports fans, underserved Indian audiences in America, and families looking for a feel-good movie that older children may appreciate.

- Hamm is becoming more popular, but he's never headlined a major release like this.
- Until audience word of mouth kicks in, it's unlikely this appeals to a crowd much wider than that of something like Moneyball on opening weekend.
- Social media buzz has left something to be desired, but that's somewhat expected without any fanboy-friendly elements.