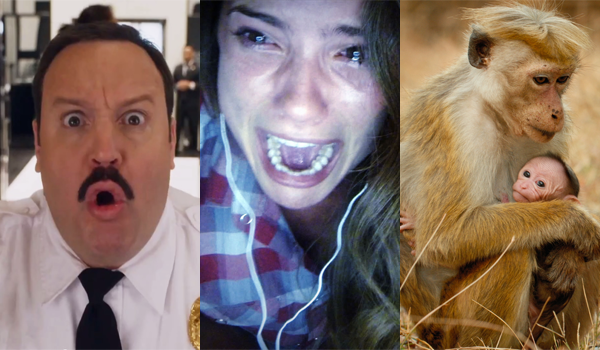 A slew of new films hit theaters this weekend, with three going into wide release off the bat. Will any take down Furious 7?

- The first film was a surprise word-of-mouth success among families with its $146 million domestic run.
- Kevin James has gone on to star two successful Grown Ups films since then.
- Flixster activity is trending on par with the SpongeBob sequel, while Facebook activity is significantly ahead of it.

- It's been five years since the original; will families who turned out then still be interested?
- Aside from Grown Ups, James hasn't found much box office success recently.
- Twitter activity, while solid leading up to this week, has plateaued a bit.

- The first trailer made waves throughout social media -- particularly Facebook -- when it premiered earlier this year.
- Horror audiences have been generally under-served with unappealing films over the past few months.
- Twitter activity has picked in the last few days.

- The R rating could limit the audience size as the film will appeal to a large amount of underage youth.
- The unique marketing campaign could leave awareness a bit low for those outside the target audience.
- Flixster activity leaves something to be desired.

- Disney's (mostly) annual Earth Day release has become a tradition among select audiences.
- Families looking for something a little different may opt for this.

- Social media buzz is virtually non-existent, especially on Facebook where it claims just 547 fans... total.
- This is becoming the type of film most audiences will wait for after-market releases to view.