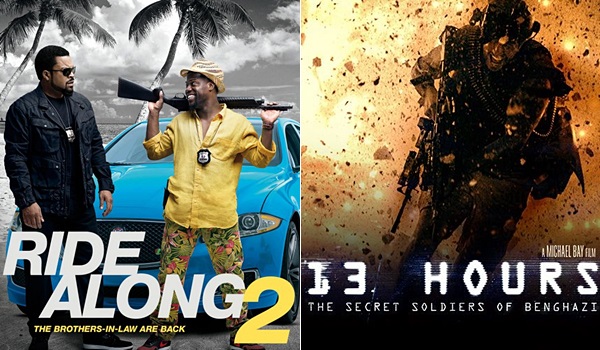 Ice Cube and Kevin Hart return in Universal's Ride Along 2, which will be released over the Martin Luther King Jr. holiday weekend. BoxOffice expects Ride Along 2 to follow in its predecessor's footsteps in route to a strong performance.

Paramount's 13 Hours: The Secret Soldiers of Benghazi will also be released over the MLK holiday weekend. While BoxOffice sees 13 Hours having a presence at the box office, we don't expect the Michael Bay directed action thriller to break out.

- Ride Along opened with a $48.6 million four-day take over Martin Luther King Jr. weekend back in 2014 and displayed healthy holding power throughout its run.

- With the success of Straight Outta Compton earlier this year, Ice Cube's popularity is even higher than it was when Ride Along was released.

- Early Twitter activity for the film has tended to trend very positive.

- Kevin Hart hasn't been able to duplicate the break-out success of Ride Along with follow ups such as About Last Night, Think Like a Man Too and The Wedding Ringer since then.

- As a sequel, it is unlikely holding power for Ride Along 2 will be as strong as it was for its predecessor.

- Similarly themed films such as Zero Dark Thirty, Lone Survivor and American Sniper have all excelled in recent years during the month of January.

- Michael Bay's following should provide at least a minor boost to the film's potential.

- The film is generating very steady activity on Twitter thus far, though a sizable percentage of that activity has been negative in tone.

- Audiences, regardless of politics, may not want to relive the 2012 Benghazi attack, especially after a relatively short amount of time.

- The film won't have the awards season prestige that Zero Dark Thirty and American Sniper both had.

- In addition to Ride Along 2, the film will also face significant competition from holdovers such as The Hateful Eight, The Revenant, and Star Wars: The Force Awakens.

Daniel Garris and Shawn Robbins contributed to this report.

Tags: 13 Hours: The Secret Soldiers of Benghazi, Ride Along 2, predictions