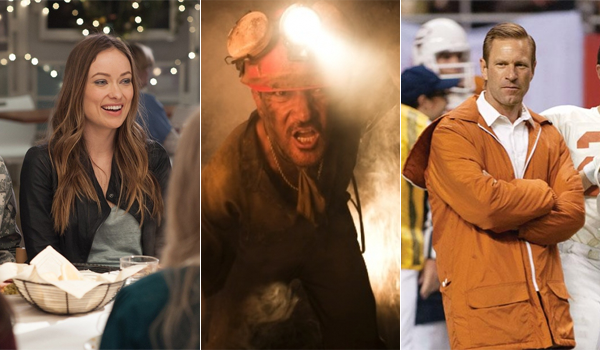 Three new wide releases open for the second weekend of November, but none are likely to challenge Spectre and The Peanuts Movie.

- The ensemble cast of well-known and respected actors gives it an advantage over the weekend's other releases.
- Twitter activity is generally on par with that of This Is Where I Leave You, an encouraging sign for a relatively low profile flick.

- Christmas- and holiday-themed comedies haven't fared well at the box office in recent years.
- Facebook activity is trailing that of This Is Where I Leave You.

- Antonio Banderas' presence could give the film some drawing power among older Hispanic audiences.
- Facebook activity is much stronger than that of No Escape, although that's not saying much.

- Audience interest in a dramatic retelling of the real-life mining incident seems pretty low.
- Twitter activity is considerably behind that of No Escape.

- Faith-based films have found great success at the box office over the past few years.
- Leading man Aaron Eckhart gives the pic some commercial flavor.

- Social media activity is generally muted in advance of release.
- Opening in between busy weeks at the box office probably won't help matters for this or any other new release.

BoxOffice projects this weekend's top ten films will tally around $97 million. That would mark a 23 percent slip from the same frame last year, whose top ten earned a combined $125.7 million as Dumb and Dumber To debuted with $36.1 million.

Tags: Love the Coopers, The 33, My All American, box office predictions