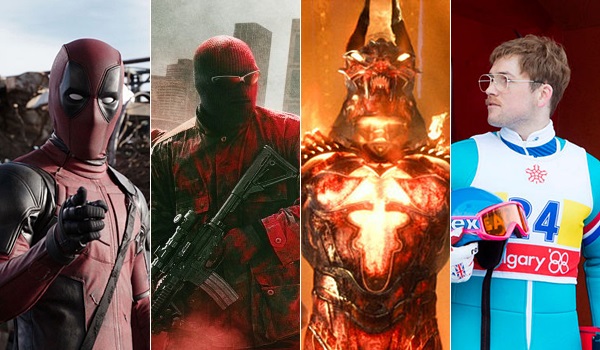 Fox's Deadpool will have no problem continuing to dominate the box office once again this weekend. After experiencing a sizable 57 percent second weekend decline, the blockbuster antihero film starring Ryan Reynolds is likely to stabilize a bit this weekend, though a sizable decline is still expected due to built-in front-loading as an X-Men universe film.

- As the weekend goes on, Triple 9 could benefit if Gods of Egypt does indeed go over poorly with initial audiences on Friday.

- Triple 9 not picking up the pace a bit more on Twitter this week is a bit concerning, especially given that Open Road has a history of films having inflated online activity.

- The film currently boasts a modest 58 percent Tomatometer on Rotten Tomatoes. While critical reviews won't hurt the film at that rate, they likely won't help much either.

- Deadpool and Gods of Egypt will provide plenty of direct competition this weekend.

- Gods of Egypt has a strong ensemble cast that includes Nikolaj Coster-Waldau, Gerard Butler, Brenton Thwaites and Geoffrey Rush. Director Alex Proyas has also had a noteworthy following over the years.

- A film featuring Egyptian deities could appeal to the same moviegoers who have showed up for the Clash of the Titans and Percy Jackson films in recent years.

- In the box office battle with Triple 9 this weekend, Gods of Egypt will have the advantages of higher priced 3D and IMAX 3D admissions, as well as a significantly larger location count.

- While it has picked up the pace a bit this week, in general Gods of Egypt has been performing softly on Twitter, with a sizable percentage of the film's online activity being negative in tone as well.

- Gods of Egypt has generated much discussed controversy for having a largely white cast playing Egyptian characters, which has contributed to the early negative buzz surrounding the film.

- Critical reviews have yet to come in for Gods of Egpyt, but the general assumption is that the film is highly likely to be received quite poorly by critics once reviews start coming in.

- Deadpool and Triple 9 will provide plenty of direct competition this weekend.

- Taron Egerton (coming off his performance of last year's Kingsman: The Secret Service) and Hugh Jackman give Eddie the Eagle some star power.

- With a current Tomatometer of 77 percent on Rotten Tomatoes, Eddie the Eagle is on pace to be the best received film of the weekend, at least with critics.

- The film received an ad during Super Bowl 50.

- While Twitter activity has picked up a bit after the film's Super Bowl ad aired, in general, Eddie the Eagle has been performing softly on Twitter.

- Regardless of the film's quality and its stars, a film about a British ski jumper from Great Britain in the 1980s is likely to be a tough sell to today's audiences.

Thanks in part to the expected continued strength of Deadpool, BoxOffice projects this weekend's top ten films will total $91.3 million. That would represent a slim 2 percent increase over the $89.4 million top ten total of the same weekend last year, which was led by the $18.7 million debut of Warner's Focus and also saw the $10.2 million launch of Relativity's The Lazarus Effect.