Angels & Demons and Star Trek will rule the box office during what is bound to be another successful weekend. 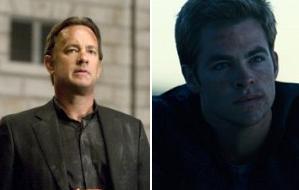 WEDNESDAY AFTERNOON UPDATE : This weekend, Tom Hanks will take on the role of symbologist Robert Langdon for the second time in Angels & Demons. Meanwhile, Star Trek will try to hold on to as much of its audience as it can on its way to a potential domestic haul of $200 million.

Based on the best-selling novel by Dan Brown, A&D will try to achieve the same level of success that 2006's The Da Vinci Code did. Code raked in an impressive $217.5 million domestically ($238.5 million when adjusted for inflation) after opening with $77 million ($85 million when adjusted). The religion-themed thriller was also released during the third weekend in May, just like A&D. Even though the critics were not kind to Code, fans of Brown's novels obviously enjoyed it enough to catch multiple viewings, because the film was able to hold its audience well during the always competitive summer season.

As of 10 a.m. PT, A&D is responsible for 33% of daily sales on MovieTickets.com, and 20% on Fandango.com. While those figures will increase as the weekend nears, A&D appeals to older audiences and that means its online sales won't reach the same levels that X-Men Origins: Wolverine and Star Trek did. In fact, Trek is currently outselling A&D on both ticketing sites. Expect A&D to open with a solid $55 million this weekend.

As for Trek, the positive critical and commercial reception it has received means that it will be able to hold its audience much better than X-Men Origins: Wolverine, which dropped an unhealthy 68% during its sophomore frame. The franchise reboot will be able to grab around $42 million during its sophomore frame, and it should cross the $150 million mark this weekend.

The $200 million mark is looking like less of a possibility for X-Men Origins: Wolverine with each passing day. The mutant superhero flick has not held up well against Trek, and at this point it may have to struggle to reach even the $175 million mark domestically before it leaves theatres.