Two new films with experienced stars enter the summer frame, but they will have to battle it out for second place. 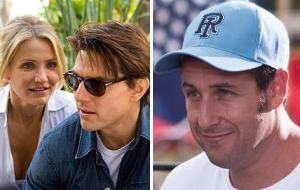 Thursday Late Morning Update: Knight and Day was off to a slower than expected start on Wednesday with $3.81 million.  At this point the film appears headed for a five-day start more along the lines of $25 million.

Wednesday Afternoon Update: Sony's Grown Ups and Fox's Knight and Day both enter the summer marketplace this weekend. However, despite boasting such stars as Adam Sandler, Kevin James, Tom Cruise and Cameron Diaz, neither film will be able to top Disney's Toy Story 3 during its sophomore frame. In fact, it appears highly likely that Toy Story 3 will out-gross both films combined this weekend.

Toy Story 3 opened with a very strong $110.31 million last weekend. Though the computer animated sequel experienced a somewhat surprising Saturday decrease, the film has made up for that in a big way by holding up exceptionally well during the midweek thus far. With a combined Monday and Tuesday gross of $30.73 million, Toy Story 3 is on course to experience a very strong second weekend hold. That comes as no surprise given the film's tremendous early word of mouth, its appeal with a wide range of demographics and its continued higher-priced 3D grosses.

As of 4 p.m. PT, Toy Story 3 represents 36 percent of daily sales on Fandango, which trails only Eclipse with 44 percent.

Expect Toy Story 3 to remain in first place this weekend with $68 million. That would represent a very healthy 38 percent decline from last weekend.

Adam Sandler and Kevin James re-team in Grown Ups, and this time along they are bringing Chris Rock, David Spade and Rob Schneider along for the ride. With its all-star cast, Grown Ups seems like a sure thing on paper. However, despite that cast and a high-profile advertising campaign (which included various ads throughout the recent NBA Finals) the film simply isn't registering very loudly in the online community for a film of its size.

As Grown Ups has approached its release date, some of the advertising focus has shifted more towards James, no doubt as an attempt to bring in some of the same fans that made Paul Blart: Mall Cop a surprise hit for Sony last year. Given the presence of Toy Story 3 and The Karate Kid in the marketplace, duplicating the success of Paul Blart will be easier said than done for Grown Ups.

According to WebWatch, Grown Ups is only responsible for a 2.15 percent market share of Internet opinions among upcoming releases. Echoing this factor is the film's modest performance on Twitter so far this week. The film's recent performance on Facebook has also left a lot to be desired.

The film is making more noise at Flixster. "Grown Ups is actually showing very strong interest among Flixster users, particularly as a date-night choice," according to Flixster spokesperson John Singh. However, Singh also adds that "overall activity is low compared with other recent titles, and is about 1/3 the level of Toy Story 3 at the moment."

As of 4 p.m. PT, the film has yet to break into the top five of daily sales on Fandango, which isn't a good sign at this point.

I Now Pronounce You Chuck and Larry opened with $34.23 million back in July of 2007, but don't expect Grown Ups to match that figure. Instead, look for the film to open in second place with $28 million from an estimated 3,200 locations.

In an attempt to get a head start on the weekend, Knight and Day opens in 3,042 theatres today. It has been a tough summer so far for both action fare and Fox, so the film clearly has its work cut out for it. In an attempt to build up last-minute buzz, Fox sneaked the film this past weekend. The film will be a major test for Tom Cruise, who has been largely missing in action from starring roles in the period since 2006's Mission: Impossible III. A major stumbling block for Knight and Day is that it comes on the heels of such similar recent films as The Bounty Hunter, Date Night and Killers.

Knight and Day has registered significantly more tweets than Grown Ups this week, but the comparison isn't quite that simple given that Knight and Day opens two days earlier and is likely to appeal to the target Twitter audience more so than Grown Ups. The film has been simply non-existent on Facebook, which is becoming a common trend for Fox releases.

On Fandango, Knight and Day is responsible for 7 percent of daily sales as of 4 p.m. PT, a figure which is improved by the film already playing today.

Over on Flixster, Knight and Day is showcasing signs similar to those of Grown Ups. According to John Singh, "Both films are seeing Flixster activity levels somewhere between The A-Team and Get Him to the Greek."

If both films were opening on a Friday, it would likely be a close race for second. But with the Wednesday opening, Knight and Day will have to settle for third over the weekend instead. It's also highly possible that there won't be a rush-out on Wednesday and Thursday due to the fairly last minute release date change.

Look for Knight and Day to register respective three-day and five-day grosses of $22 million and $31 million.