Weekend Predictions: 'Oz: The Great and Powerful' & 'Dead Man Down' 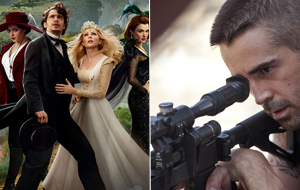 The second frame of March welcomes what should be the biggest debut so far of 2013. Disney launches Sam Raimi's Oz: The Great and Powerful and will be aiming to become the first movie of the year that captures a large family audience. Meanwhile, Dead Man Down will roll into theaters in an effort to counter-program.

Oz: The Great and Powerful

- The original Wizard of Oz is a widely beloved film to this day.
- The Disney marketing machine.
- The ensemble cast led by James Franco helps the film stand out among audiences of varying ages.
- Families haven't had a high profile movie to choose from since The Hobbit.
- Director Sam Raimi is more well known to audiences compared to other directors thanks to his success with the Spider-Man trilogy.
- The slumping 2013 market and it's unappealing mainstream offerings could result in this being the benefactor of pent-up moviegoer demand for an event-like movie.

- Reviews have been middling.
- While strong in it's own right, Twitter activity has trailed that of Snow White and the Huntsman during the comparable week of release.
- Franco and co. aren't really draws on their own.
- Is the early box office slump in 2013 attributed more to economical factors or choice/quality of movies?

- Should provide decent counter-programming for action fans and those not looking to see Oz this weekend.
- Selling the film as "from the director of the original The Girl with the Dragon Tattoo" could entice fans of those films to come out.
- Facebook activity has been decent.

Check out our predictions for these films and the remainder of the top 10 in the table below.

Tags: Oz: The Great and Powerful, Dead Man Down