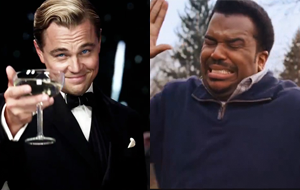 Also, you can now find our final domestic forecasts for the weekend's new releases below our analysis.

- Leonardo DiCaprio and established director Baz Luhrmann bring the film a lot of potential mainstream interest.
- The classic book and original Robert Redford film are well-known among older crowds.
- A strong marketing campaign from Warner Bros. is helping to interest younger audiences (women, in particular). The use of modern music from artists like Jay-Z is also a factor.
- Twitter and Facebook activity have been excellent this week. Flixster numbers are also strong.
- Provides counter-programming for those who have already seen, or don't want to see, Iron Man 3.

- Opening in the wake of Iron Man 3 will still prove challenging. The second weekend of May rarely produces breakout openings.
- Early reviews are on the negative side of things.
- Modern music and flair aside, Gatsby is a period film and those typically have a rough time finding big audiences.

- Tyler Perry's "presents" credit will help the film cater to his fans.
- Star Craig Robinson is well-known from his roles in "The Office", Hot Tub Time Machine, and various Judd Apatow flicks. Kerry Washington is also fresh off the success of Django Unchained.
- Should appeal to urban crowds looking for a comedy.

- The Perry fan base is limited and doesn't always turn out, especially without Perry's presence in the film itself.
- Those looking for a comedy are likely to wait for The Hangover Part III in two weeks.
- The film's Twitter activity is significantly behind Tyler Perry's Temptation. Facebook activity only slightly trails.

The BoxOffice team is forecasting a $115 million domestic total for The Great Gatsby and $28 million for Peeples.

Check out our weekend forecast for these films and the remainder of the top 10 in the table below.